CEOs get paid too much 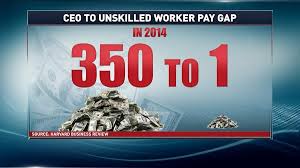 According to research by Sorapop Kiatpongsan and Michael Norton, most people, regardless of nationality or set of beliefs, share similar sentiments about how much CEOs should get paid. And for the most part, these estimates are markedly lower than the amounts company leaders actually earn. CEOs get paid too much. For the studied countries combined, the ideal pay ratio  for CEOs to unskilled workers was 4.6 to 1, the estimated ratio was about double, at 10 to 1. People in Denmark  estimated the ratio to be 3.7 to 1, in South Korea, the estimated gap was 41.7 to 1.

Universal desire for smaller pay gaps
Despite enormous differences in culture, income, religion and other factors, respondents in every country surveyed showed a universal desire for smaller gaps in pay between the rich and the poor than the current level in their country. When compared to how much CEOs actually earn the actual pay ratios differed much more than the estimated-ideal gap. The late Peter Drucker warned that any CEO-to-worker ratio larger than 20:1 would “increase employee resentment and decrease morale.” By 2005 the gap had reached 400: 1 in the United States.

Lack of knowledge
The researchers say that the lack of awareness of the gap in CEO to unskilled worker pay (estimated 30:1 in the Unites States, but which is in fact 350:1), likely reduces citizens’ desire to take action to decrease that gap. There is an extreme lack of knowledge about the true state of affairs. The researchers’ hope is that by presenting the data to a wie audience people may examine their assumptions about whether some people should make more than they believe is desirable.