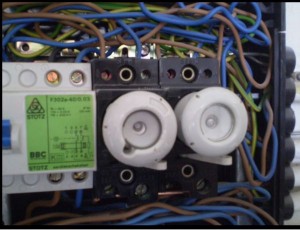 The Dutch Hoppenbrouwers firm was started in 1918 as a small shop in electric fittings. The business grew and expanded and when son Theo took over, the family firm had grown into an electrical engineering company with ten employees. Although he was reluctant to take on responsibility for the company at the age of 21, and lacked self-confidence, he worked day and night to make the company successful. The responsibility for the continuity of the company weighed on him. He felt imprisoned by the standards his father had set for him: ‘no one else should do something you can do yourself’. And: ‘anything you can do today will not need doing tomorrow’. Theo became increasingly insecure. He tried to keep problems to himself and solve them on his own (“Whenever someone else did not do things fast enough I would do them myself. I worked harder all the time.”). Although Theo worked very hard, during the economic crisis in the eighties the company had a capital deficiency of some 300 K. Theo sought every possible means of cutting costs. He started to have doubts about his marriage, on the assumption that he could not share his business problems and financial worries with his wife. Slowly it dawned on him that he was unable to direct the company all by himself. This fuelled his insecurity and he was plagued by destructive emotions.

Together
In 1982 he joined a group of electrical engineers that had been brought together by an accountant. He was awestruck as he listened to other people’s stories and ideas. He realised that there was a lot of distance between him and his people and that he should share his business problems more with his staff. Four years later, Theo gathered all his employees together for the first time. He asked them how they thought the company was doing. They spoke about service, quality, clients, his leadership style and possible improvements. After this meeting, a group of three proceeded to look at quality improvement and a better organisation of business processes. Gradually, measures were implemented and the group’s activities taken over by more people. As a result, the company was one of the first in the electrical engineering branch to have an ISO certification. By sharing the responsibility for the form with his employees, Theo gained self-confidence. He fired the bookkeeper his father had originally hired and said goodbye to his dad’s accountant.

Personal crisis
Theo saw that his new approach was better for the business. After all those years, he could finally breathe because responsibilities were shared more. At that point he started having problems, diagnosed as manic-depressive complaints and he started taking medication. (“Looking back, I was actually furious”). He found a psychologist nearby, who would see him right away. His leave of absence from the company eventually lasted for 18 months. During these months, his wife, brother and accountant kept the company afloat and, at an accelerated pace, they put into practice what Theo had started. From the sidelines Theo discovered that his employees were actually happy to take responsibility. They wanted to be proud of the company. (“In a way, my illness was a blessing.”) Because he saw that the company did well (“I was so proud of those guys”), he used the time for his recovery as a period of awareness, study and recovery. He worked on his marriage, took on sports and gradually he found a better balance.

Value added?
As he recovered, he questioned himself whether he wanted to go back and if so, how. Now that everyone in the company gladly took responsibility, he questioned his added value to the company. He decided to return and use his own experience to contribute to his employees. He had come to view (long-term) illness as a behavioural expression of discontent or underestimation, not as coincidental bad luck or a lack of motivation. The wellbeing and pleasure of his staff became his first priority as a manager. He ended the contract with the Health and Safety Monitoring Commission (“Keep your hands off my people”). He spoke intensively with his staff. With one of his employees, under threat of dismissal because of his disinterested attitude, he even visited the man’s home and spoke with his wife to find out what caused this attitude. He encouraged people who wanted to leave and sometimes helped them set up their own business. As a result of Theo’s new mission, absenteeism went down from 7-8 % to 1.5 %. 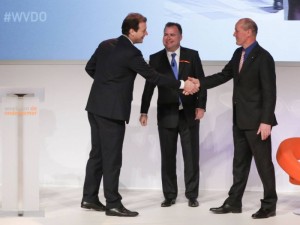 Results
Even more than before, Theo began to involve his people in decisions about the company. He eradicated the salesforce: all employees were put in charge of serving and satisfying customers. He invested in advanced tools and technology. In addition, Theo invested heavily in the personal development of his staff, both in technical and social skills. He organised programmes to train his electricians in the new values and culture of taking responsibility. Although his colleagues in other electrical engineering companies thought he was going mad, the new policy was successful. In the year after Theo had recovered and taken a new role in the company, sales exploded. (“We barely needed to lift a finger to make unprecedented profits.”). In 2005 the company won the BOV trophy for best entrepreneurial vision. In the report, the jury express their praise for the fact that everyone in the company is an entrepreneur. For example, each team has its own budget. Teams can borrow money from the Hoppenbrouwers bank to invest in special projects, but have to pay back the money. To manage their budget, each team has clear overviews of costs per project, figures that are visible for all team members.
In 2010, Hoppenbrouwers was chosen Best company to work for in the province of Brabant. The jury selected Hoppenbrouwers because the company always puts human beings first, which is illustrated by the fact that there are no appraisals, only employee satisfaction meetings.

Philosophy
According to Theo, business innovation is mainly social innovation: from the bottom up, participation, entrepreneurship. Technical innovation will follow on from there. In his company, everyone devises improvements. Theo strongly believes that the company belongs to the people who work there. (“I never saw the company as my property or profit as the objective. The company belongs to everyone who puts his heart and his all into it.”)
Since everyone is involved in the firm’s development, the organisation is flat. Whenever someone comes up with a good ideas action can be taken immediately. The company consists of twenty teams, usually organised around a client group or a specific technology. Team managers are mainly coaches, who create conditions for employees to perform well and opportunities for staff to develop. There are no formal meetings. If consultation is needed people just get together. Twice a year there is a Management Day, in which team leaders and staff come together around a current theme, usually on the premises of a major client.

Clients problems lead the way to innovation (“We do not invent things. We are smart in installing technical solutions so that clients can save energy. We find solutions together with the client.”). The company has no R & D department but helps clients with solutions that have worked elsewhere. Together with his employees, Theo drew up a list of dream clients they wished to work for. De Efteling, a large amusement park, was their number one. After years of patient work on the relationship, the firm was able to welcome De Efteling as its client.