After an out-of-control banking system sank Iceland into financial meltdown in 2008, the country is recovering quickly. What is the secret of Iceland’s financial revolution? “As the first country to experience the full force of the global economic crisis,” the IMF said, “Iceland is now held up as an example by some of how to overcome deep economic dislocation without undoing the social fabric.” Nobel laureate Paul Krugman agrees.”Where everyone else bailed out the bankers and made the public pay the price, Iceland let the banks go bust and actually expanded its social safety net”. Iceland, he found, had demonstrated the case for letting creditors of private banks gone wild eat the losses. Krugman recommended a similar policy cocktail for other nations in crisis. The rules are as follows: Allow your ailing banks to collapse; devalue your currency if you have one of your own; introduce capital controls; and try to avoid paying back foreign debts. 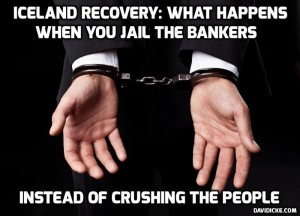 Against bankers’ logic
What happened in Iceland from 2008 to 2011 is regarded as one of the worst financial crises in history. Never before had a country amassed such great sums of money per capita, only to lose it again in a short period of time. But Iceland also staged the fastest recovery on record. From the wreckage, only three modest domestic banks emerged, allowing Iceland to keep functioning. The country was also able to let its overheated currency devalue, and impose capital controls to bring some stability. Thet did the exact opposite of everything the bankers and economists told everyone to do. The bankers and economists told that governments needed to bail out the criminal banks, at taxpayer expense, as th banks were ‘too big to fail. Iceland gave the bankers nothing.
The bankers also told that no amount of suffering was too great in order to make sure that the creditors got paid at 100 cents on the dollar. Iceland told them they would get what was left over, after the people had been taken care of (by their own government). Iceland is the only country to have jailed some of the fraudulous bankers. The number of bankers imprisoned over the meltdown is 26 and combined, the bankers will spend 74 years behind bars. While critics often warn that cracking down on finance hurts the economy, Iceland’s experience has shown it’s possible to pursue corporate accountability and broad growth at the same time.

Fast recovery
But that is not the whole story. Since 2011, the gross domestic product has been on the rise once again, most recently at 2 percent. What is more, salaries are rising, the national debt is sinking and the government has paid off part of the billions in loans it received in 2008 from the International Monetary Fund ahead of schedule. Unemployment, which briefly rose to 9.2%, has dropped back to 5.1%. Inflation is falling back to its target range, and house prices in Reykjavik are on the rise. Credit rating agency Fitch gave this assessment of the recovery in February 2015: “The upgrade reflects the impressive progress Iceland continues to make … [and] is underpinned by high income-per-capita levels. Rich natural resources, a young population and robust pension assets further support the rating.”

Citizens first, foreign creditors second
Meanwhile, however, international bondholders and depositors were left out in the cold, waiting to recover what scraps they could from the banks’ administration processes. Icelanders couldn’t see why they should pay for the greed of foreign investors who followed the Siren song of high interest rates to the island nation. British and Dutch taxpayers still have significant exposure to the Landsbanki administration. As priority creditors they have had almost 55% of their claims repaid, though the remainder will take a good deal longer to be paid out. Economist Ásgeir Jónsson fears ‘economic and mental isolation’ for his country in the future. New foreign investors, as badly as they are needed, are scarce and export levels are insufficient. Iceland has to open itselfto the world; otherwise it will definitely go under in the next crisis. 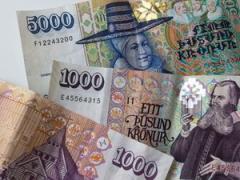 Rethinking money creation
Iceland is the first European country that has completely recovered from the financial crisis. And Iceland’s financial revolution doesn’t stop there. It is the first country since the financial crisis to seriously consider implementing radical changes to its monetary system. Icelandic officials are thinking about redefining money in a way that may end baking as we know it. Iceland’s prime minister commissioned a report from Sigurjonsson, a parliamentarian, which argues that banks should’t have the power to create money, something banks do all the time as they give out loans. According to the report, this system of creating money is unstable. If homeowners default on their payments, as many did during the financial crisis, everyone is in trouble. Sigurjonsson argues instead for a system in which the government essentially runs checking and saving accounts. No bank would be able to make a loan without taking the money out of some other account ahead of time. So instead of multiplying with each cycle of borrowing and saving, the money in this kind of system would just move around from place to place. The central bank would be responsible for creating new money to use as the economy expands. In the current system, the central banks shares that responsibility with commercial banks.

Banks replaced by a network of mutual funds
One major advantage, as Martin Wolf has argued in The Financial Times, would be that this system would be enormously profitable for the government. He writes that if the United Kingdom operated according to this plan, the government could basically operate without taxation and without borrowing money, as long as it didn’t spend more than 4 percent or so of gross domestic product. Larry Kotlikoff, economist at Boston University and a proponent of systemic reform, argues the Icelandic proposal doesn’t go far enough. While banks wouldn’t be able to create money, they’d still be able to borrow it, leaving the system vulnerable to defaults. “This is not going to do anything to deal with the reality of what happened in Iceland,” Kotlikoff said. “What they’re doing is a substitute for real reform.” Kotlikoff argues that banks should be replaced with a network of mutual funds with publicly listed assets, which would move money around the economy by buying and selling shares in one another. These shares could lose value, but the goal would be to eliminate default and crisis entirely.

Whether Iceland will see these changes is uncertain.Until now, the report is being discussed and no changes have been made as yet.