Re Gen: a self-sufficient neighborhood 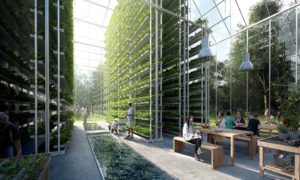 Just outside Amsterdam, in a new suburb neighborhood Almere, your dining room might be next to an indoor vegetable garden. This neighborhood is the first ReGen Village, a new type of community designed to be fully self-sufficient, growing ist own food, making its own energy and handling its own waste in a closed loop. The self-sufficient ReGen Village expects to produce tons of organic food all year long, from vegetables and fruit, to nuts, legumes, fish, eggs, chicken and small animal dairy, to supplement seasonal garden products.

Pure nature, high tech
By using the most advanced methods for growing food, the self-sufficient neighborhood will grow many times more food than a traditional farm of the same size, with fewer resources. Aquaponics, which combines conventional aquaculture (raising aquatic animals such as snails, fish, crayfish or prawns in tanks) with hydroponics (cultivating plants in water), can produce 10 times as much produce on the same amount of land, with 90 % less water. In normal aquaculture, excretions from the animals being raised can accumulate in the water, increasing toxicity. In an aquaponic system, the water  is fed to a hydroponic system where by-products are broken down by specific bacteria into nitrates, utilized by the plants as nutrients. The water is then recirculated back to the aquaculture system. Other methods include permaculture, aeroponics, vertical garden systems and high-yield organic farming.

Waste into energy
The community will also produce its own energy, using a mixture of solar, geothermal, wind and biomass energy. ReGen Village is researching how they can transform farm waste onto a consistent energy source in a way that can power the Village even in winter and can charge electric cars as needed. A biogas plant will turn non-compostable household waste into power and water. A water storage system will collect rainwater and graywater and redistribute it to irrigate seasonal gardens. 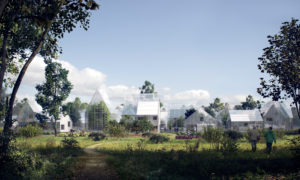 Eco-villages around the world
ReGen Villages are developed by CEO James Ehrlich, a California-based business man, who has partnered with Effekt, a Danish architecture firm, on the design. The Almere Village, twenty minutes by train from Amsterdam, consists of 100 houses. In the same neighborhood, ReGen is also experimenting with a scaled-down version with 35 condo suites. Almere Village is the first of a series of similar communities that ReGen plans to build around the world. There are projects planned in Sweden, Norway, Denmark and Germany, where interest in eco-villages is high, nut there are plans to expand elsewhere. Rural India, sub-Saharan Africa, where we know the population will increase and resources are scarce. If people in these continents want to build the same kind of suburbs as in Western European towns, the planet will not survive. 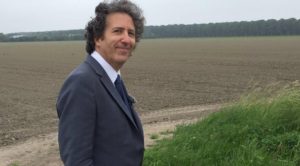 Redefine urban development
Ehrlich, who also works as an entrepreneur-in-residence at Stanford University and a senior technologist there was inspired by a 2013 UN report that argued for the creation of self-sufficient communties. His misson is to redefine residential real-estate development by creating these regenerative neighborhoods, starting with greenland fields of farmland where more organic food, clean water and clean energy can be produced than if that land was left to traditional farming. Almere ReGen Village, which is to be completed by the end of 2017, is his testcase.