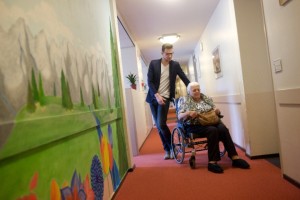 Jurrien (20) is one of six students who have chosen to live in the yellow-brick home in Deventer in the eastern Netherlands as part of a unique project that benefits everyone. The university students pay no rent and in exchange spend at least 30 hours a month with some of the 160 elderly who live here, doing the things professional staff cannot always do — such as just hanging out. Johanna (92) beams at Jurrien, her housemate, stepping into her room. Jurien stops by for a chat, they sometimes play games, or he goes with her to the shopping centre. The project is initiated by one of the Humanitas retirement homes in the country. Gea Sijpkes, head of this home: “It’s important not to isolate the elderly from the outside world.”

Intergenerational projects
While retirement homes in many European countries lack room for an ageing population, budget cuts by the Dutch government have made it increasingly difficult to get a subsidised place, leaving some with more rooms than they can fill. So-called “intergenerational” projects are also springing up elsewhere in Europe, but usually not within retirement homes because of the shortage of rooms. In some projects, the elderly rent out a room in their own house or apartment; in others, housing projects are built specifically to house the young with the elderly. In the French city Lyon, a project was set up for students to pay rent to live in a retirement home, but the rules are strict and, unlike in Deventer, friends are not allowed to visit. In Britain, a commission chaired by a former minister recommended last September that new housing for the elderly and disabled should be incorporated into shopping developments, new apartment blocks and even universities to prevent the elderly from being cut off in ‘care ghettoes’. “The old model saw care homes as isolated institutions where things were done to you rather than for you, and were islands of misery,” said former care minister Paul Burstow. 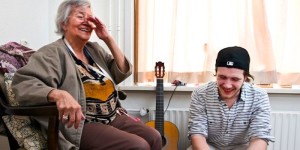 Both elderly and students content
The students in Deventer prepare simple meals for some of the elderly in the evening and offer them activities according to their interests. Student Jordi, for instance, took a group into the garden and gave them cans of paint to spray on cardboard so they could learn about graffiti.
Jurrien gives weekly computer lessons to Anton Groot Koerkamp, 85. He is very content.“Now I can send emails, go on the internet, look up videos and go on Facebook,” he said proudly. There is no obligation for the elderly to take part in activities with the students. But many, like Jurrien’s neighbour Johanna, seem happy with the arrangement. The students are content as well.  “Not only do I not pay any rent, but I also like working with the elderly,” said journalism student Denise (22). Given that student rooms are too small, too dirty and too expensive, this is a fantastic alternative, Jurrien agrees. “For €400 I’d get barely 10 square metres and I’d have to share the kitchen and bathroom. Here I have twice as much space and I have my own kitchen and bathroom.” The students can have friends over for drinks and even have a partner over for the night. There is no curfew or other restriction as long as the students are reasonable.As for the contacts with the elderly, he says: “We do small things, not much really, but it helps to put them in a good mood,” said Jurrien.