Most prisons see their primary purpose as guarding inmates safely during their sentence. Or protecting society from villains. The Chief Police Commissioner of the city of Granada in Nicaragua, thinks differently. Of course inmates should be guarded, and society needs to be protected, but would it be possible to have inmates build a motivation to participate positively in society once they are released? 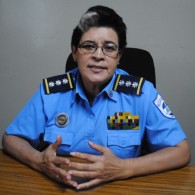 New purpose
This question has led the Chief Police Commissioner, Teres de Fatima Flores Méndez, to engage inmates in creating a new prison experience. Inmates are not forced to work, but are offered to do normal work rather than just sit in their cells. For every day the inmate works, he will be credited two days of his sentence. So if you work consistently for one year, you will have done two years of your sentence. They can work in bicycle repair shops, do some carpentry or grow vegetables for the prison meals, or they can clean and maintain the prison. This way, the inmates feel responsible for their surroundings. There is no waste lying around, there are new crops planted on every patch of land, even flowers all around, wooden sheds with the workshops and even a new Virgin Maria shrine.

Strong motivation to behave
The new philosophy extends to the time after inmates are released from prison. Those who have worked in prison are able to set up their own workshop or find a job. Every Sunday for the rest of their original sentence time the inmates will come back to the prison and work for the day. This way the police will maintain contact with former inmates so they have a strong motivation to behave. If they misbehave, they go back to jail and not only serve time for a new crime, but also have to serve the credited time.

A new future
The costs of the program, which is calles Mi Futura  (My Future) are limited to tools and equipment needed to establish the workshops, for which the Commissioner found a donor in the community of Granada. This program gives inmates a real motivation to create a better future for themselves and their families. A mechanism has been created to motivate inmates to do the right thing, not because they are forced to, but because it is in their self interest to do so.